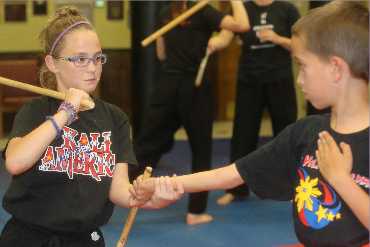 Bullying is one of the most horrifying problems our society is facing nowadays. Around 3.2 million students are victims of bullying each year which has caused most students especially teens to skip school. How could we implement education to young people when the place we thought would be the best place for them to learn becomes a traumatic one for children? Parents’ high hopes for their children are put at risk when children start to feel belittled and bullied in the place where is supposed to be their second home.

In addressing this problem, it has been found out that martial arts can be of great help for parents who have been into this situation of having children being bullied at school. Martial Arts does not only introduce techniques on defensing oneself but it also provides other benefits such as gaining confidence, respect, discipline, self-control, stress-relief, and leadership which are great factors to stop bullying.

How could these factors stop bullying?

Confidence – Projecting an aura of strength can help a child become not a target for bullying since being weak and scared calls a bully’s attention to start his intention of bullying.

Respect – Everything starts within ourselves. Thus, inculcating to the minds of these children that respecting themselves is the first step to winning other people’s respect is one of the best ways for a bully to see high respect to someone who has it for himself.

Discipline – Seeing oneself and learning to manage one’s behavior will lessen a bully’s opportunity to identify prospect for bullying. Once a child knows how to act accordingly, especially in public, he is then giving a bully no chance to make a move.

Self-control – Not allowing a negative situation from happening is always possible for as long as children learn to manage their behavior, conflict and violence can always be prevented.

Leadership – Being sociable and gaining a lot of friends is one way of practicing one’s leadership skill. One cannot be a leader without being in a group. Having the chance to mingle with other kids also gives the child an opportunity to be in a group and less opportunity to be bullied.

With these facts, let’s help hand in hand in stopping violence caused by bullying and keep doing martial arts instead.