I was excited earlier today to buy two piñatas and candies for the kid’s karate Halloween party at the studio. We started having each kid share their story why they choose that particular costume they were wearing. Some are more elaborate than others and some are scarier than others. Some look like they are dressed going to a Cinderella Ball. I was dressed as half master T and partly batman.

The kids were ecstatic and a lot of energy and from what I had counted giving the first gift of candy bags prepared by Sue and Crystal, it was more than 40 children at the Kid’s Karate Halloween Party.

The kids were definitely noisy with a lot of different energies and with what was about to happen. After each shared their brief story, I had them line up for the first contest for kids under 4 and up to 6 years of age. It was tough and I had let the other kids be the judge, their own peers to check them out for the best costume or what they thought they like other kids.

But before the contest started I shared a story (read below) what Halloween to us back how I was growing up in the Philippines and how my family shared important knowledge that still exists to this day.


Kids Karate Halloween Party and costume contest were selected winners by clapping their hands and it also proceeded to move on to the older kids once the younger ones were selected. In each age group categories, there were up to top 3 places that were selected as winners. Each one was given a bag of treats.

Then the fun really started after the costume contest was finished when I came up with one piñata for the younger ones. It was a riot! And fun to watch these kids swing at the piñata. Matt Jones helped on controlling the piñata, Ms. Cheryl helped with kids at-bat each time. This time, we decided not to blindfold the kids at all and are given a certain amount of number to swing the stick to hit the piñata. Everyone on the younger group of kids had a chance more than twice to swing and go for the piñata filled with candies.

This holds true for the older kids. They could not wait and the older ones are more plentiful in numbers. Most of them had a chance to go at it and I made make sure that safety was in place both the younger ones and the older kids. Finally, when the piñata was ripped open I finally stepped in to spread the candies on the younger kids and I also did it with the older ones. I am conscientious of safety. We had some incidents that kids being stepped on and head butted but the pain did not last long since these kids aim was getting those yummy candies. The kid’s karate Halloween party/costume contest lasted an hour and a half. It was a blast and  all the kids had a blast and many of the parents also had a great time watching their kids have fun in a safe environment at TAMA Martial Arts Center. 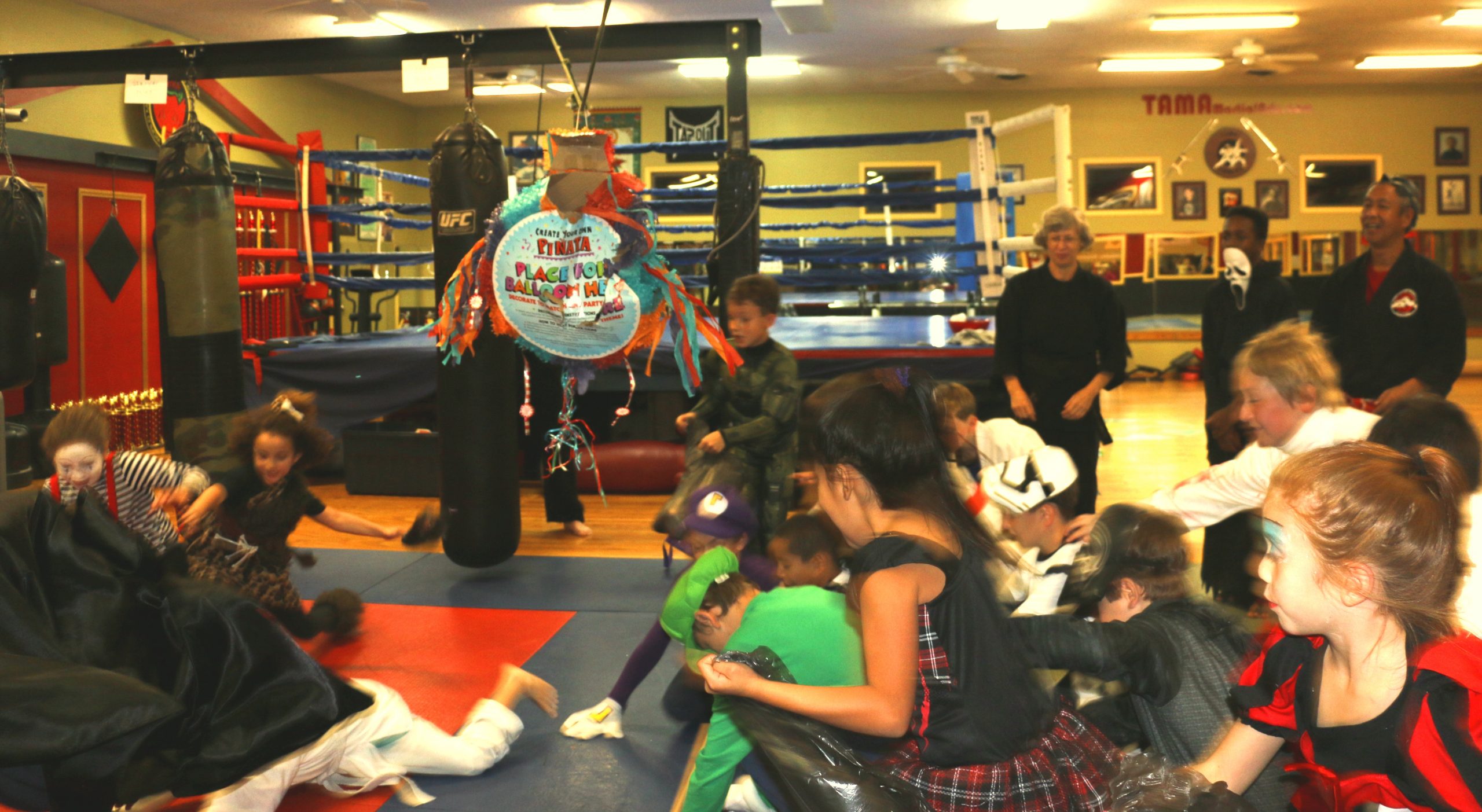 Halloween as we say here in the USA. What is Halloween to you? “Straddling the line between fall and winter, plenty, and paucity, life, and death, Halloween is a time of celebration and superstition. It is thought to have originated with the ancient Celtic festival of Samhain when people would light bonfires and wear costumes to ward off roaming ghosts. In the eighth century, Pope Gregory III designated November 1 as a time to honor all saints and martyrs; the holiday, All Saints’ Day, incorporated some of the traditions of Samhain. The evening before was known as All Hallows’ Eve and later Halloween. Over time, Halloween evolved into a secular, community-based event characterized by child-friendly activities such as trick-or-treating. In a number of countries around the world, as the days grow shorter and the nights get colder, people continue to usher in the winter season with gatherings, costumes, and sweet treats.”- http://www.history.com/topics/halloween/history-of-halloween

As a young kid growing up, I was exposed to honoring our relatives and we would have a week-long prayer vigil, way different from Kids Karate Halloween party here in the States. Prayers of our relatives and friends who had died before us and honoring them were the meaning of Halloween for us growing up. It is still practiced to this day in a close-knit family. It was nothing to do with superstition or costumes or trying to scare a ghost or belief of something or any type of cult practice back many centuries old like in Europe. It was always honoring our loved ones who had gone on before us. I was taught to respect my elders, my family, and my teachers. In this modern days, I have seen students forgot how they have been empowered by their teachers and family members. It is all about them.

Remembering kneeling down and taking the time of a day each day for a week-long prayer vigil to honor our family who had died. I also remembered that my family created this altar with candles and with food served that they had prepared to honor and celebrate with prayers and be thankful all at the same time. Most of the food was prepared that would not spoil for days like boiled eggs and cooked sweet rice and other food that would last very long for days on top of the altar. The candles were lit at all times, the family made sure there were enough candles enough to use during the time of honoring those relatives of ours who had died.

At early childhood, meditation was taught early on. Prayers were very important to our family. We have specific prayers for a particular time when one person leave to travel or to fish, or to farm. One specific prayer still fresh on my mind and still keep it to this day and use it for a specific moment that was passed down from my mother. This was part of anting-anting from the Filipino ancient traditions.

Above storyline was a brief story that I had shared with our kid’s karate Halloween Party this past evening.  Until next year again.  Next Holiday is Thanksgiving and we will be closed on Thanksgiving Day November 24, 25 and 26, to be thankful for all what we have and enjoy with the family.