This was an exciting evening at the Tama building as the event was unfolding billed as “Friday Fight Nights” at Tama Martial Arts Center. This event was inspired by the idea of getting the students active in the competition environment. Whereby, each would have 3 rounds to fight in full mode with Muay Thai rules. The rules and regulations were also written by Master Taningco for the Ohio State Athletic Commission some years back.  Bernie Profato –the Ohio Athletic Commissioner recommended Manuel Taningco into the Association of Boxing Commissions Unified Rules and Guidelines for Muay Thai as one of the members of the Chairman’s Advisory Committee Expert Appointments nationwide.

The Dayton Muay Thai students have been a long expectation of this event to test their skills. Some are just a couple of months into training Muay Thai and many have at least 6 to 9 months of Muay Thai training at Tama Martial Arts Center. And a few had closed to one year of training under the tutelage of GM Taningco, Lee Taningco, and Nick Durst who have been training with the Taningco’s for 5 years.

The mission was to help the inactivity of competition available in the state of Ohio and for students to be actively fighting due to the Covid-19 pandemic, but only among the Tama Muay Thai students. The event inspired and challenged the members of Tama Muay Thai students. The event was not an official fight event it is an event for practicing each own skills among each other.

The second purpose was the help their confidence where family, friends, and other spectators watch their performance without any judges but only with a center referee to control and manage the fight. Robert Shelley is one of Master Taningco light heavyweight champions in Muay Thai to help the event and came as a center referee for the Friday fights nights at Tama Martial Arts. He is well versed in Muay Thai fights both experienced in the ring as a fighter and also a referee and judge for many years.

And then there is a time for the three-round and the sound of the bell for starting the fight and ending the rounds. So the idea of each fight was to make it and sound as if they were in real competition but only among themselves as practice bouts. The little crowd got excited and appreciated the event for students’ morale.

Surprisingly, there were many good fights, and spectators were amazed by their performance, mentally, physically. Each showed their tenacity and courage to get into the ring and duke it out on full mode and performed very well under pressure.

The third purpose was to be able to be a coach in their perspective corner by Master Taningco and Lee Taningco (on the other corner) and implement their learned skills in full mode contact against each other.
The fourth purpose was to get students excited and the spectators to have an event that they have never participated in, live in person.

The fifth reason was to help raise the funds for a fighter named, Nick Durst, for his future competition expenses and for replacing the Tama Muay Thai equipment for their training.

There were a total of about 12 bouts among the Muay Thai students  Some had more than one fight and most had one fight of three rounds bout. The students who participated in the Friday Fight Nights at Tama Martial Arts center were: in (Alphabetical order) 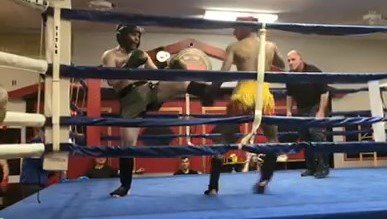 The entire coaching of Tama Muay Thai was so very proud of the students who participated in their first “Friday Fight Nights”. GM Taningco appreciated who supported the event. There will be other and more events soon to be held at Tama Martial Arts Center and its Friday Fight Night events.