The name of our style (RYU) is Icho and has a very special meaning. The Patch we wear on our gi is a design of three ginkgo leaves. “Icho” is Japanese for ginkgo.

As you train you should constantly strive to develop these three principles. 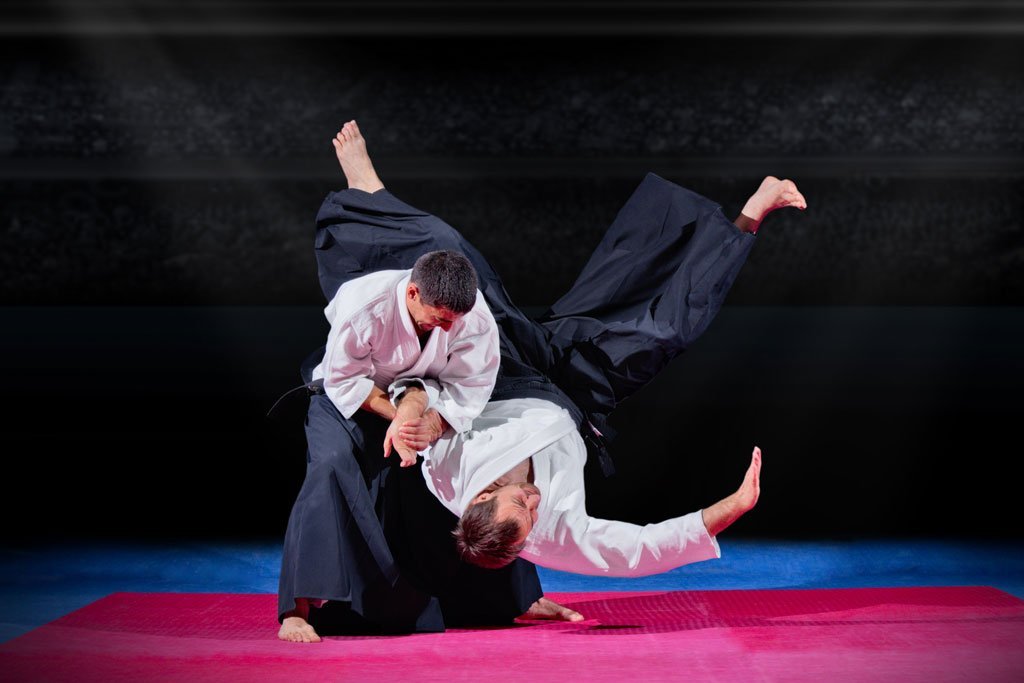 Aikijutsu is said to have been founded by Prince Tejun, the sixth son of the Emperor Seiwa (850 – 880 AD). As the sixth son he was far from the line of succession to the thrown and this left him a lot of time to practice the martial arts. Through the Prince’s son, it was passed on to the succeeding generations of Tsunamoto. Following Tsunamoto he art was passed down as a secret Bujutsu, (martial art), of the Minamoto family for many generations.

The art of Aikijutsu eventually reached General Shima Saburo Yoshimitsu Minamoto (1159 – 1189), the younger brother of Yoshie Minamoto. Yoshimitsu had many talents, poet, priest, and physician. Legend has it that he devised much of his Aiki techniques while watching a spider skillfully trap a larger insect in its web.

Yoshimitsu’s study as a physician led to great contributions to the art of Aikijutsu.1t is recorded that Yoshimitsu studied anatomy by dissecting the bodies of war victims and executed criminals to study the effects of various martial arts techniques on these bodies.

General Yoshimitsu named the art “Daito Ryu Aikijutsu”, the word Daito coming from the name of his manor Yoshimitsu’s second son, Yoshikiyo moved to the town of Takeda in Kai Province. He changed his name to Takeda and taught Daito Ryu techniques to his families and close retainers.

Yoshikiyo is said to have done much original research on the techniques of Tachidori, techniques applied against attacks with a bokken and also techniques against the yari (spear). This may be the source of blending motions of Aiki.

In 1574 Kunitsugu Takeda moved the family to Fukushima Province in Northern Japan and entered the Aizu clan. The Aizu clan studied their own variety of Ryu and had the reputation of being very tough fighters. Their unarmed arts were known as Aizu-Todome.

In 1758 Takumi Takeda taught the secret art to the Daimyo Aizu Han. At this time he called the art “Aiki-In-Yo-Ho.” “In-Yo” is equivalent to the Chinese Yin-Yang. The use of In-Yo implies that both hard and soft existed in the techniques.

Sokaku Takeda, (1858-1943) was in many people’s opinion, the last of the true Samurai swordsmen. He was born in 1858 in Izu, the second son of Sokichi Takeda, a priest at the local shrine. Through much dedicated training in swordsmanship and Sojutsu (spear arts) he became known as a true master 0 the sword and earned the nickname Kotengu “Little Demon of Aizu.” Sokaku was small in stature, barely five feet tall.

In 1880 his abilities as a sword master were tested in a real fight at a construction site. By the time police arrived Sokaku had killed 12 men and wounded many more. It is at this time that Chikamasa Saigo Tanamo, ex-Daimyo, (1829-1925) told Sokaku to put away his sword and study Aikijutsu. (1874 – Modern reforms, abolition of the feudal system, 1876 – The carrying of two swords is prohibited). Finally in 1989 at the age of 40, Sokaku Takeda took the advice of Chikamasa began studying Daito Ryu Aikijutsu at the Reizan Shrine under his uncle, Sozaemon Takeda, who was a priest at the shrine.

In 1899 Sokaku Takeda was authorized to teach the style and shortly thereafter changed the name to Daito Ryu.

In 1901 one of Takeda’s disciples, Jitsuhide Zaibu, became Chief of Police in Hokkaido and invited Takeda to teach police unit’s hand-to-hand combat. Under Takeda’s leadership, Aikijutsu remained and effective system of self-defense.

In 1909 Takeda moved to Kitami and there he net Morihei Ueshiba, who later was to become one of Takeda’s most promising disciples.

Morihei Ueshiba (1883-1969) was the son of a wealthy farmer in Wakayama Prefecture. Prior to meeting Takeda Ueshiba had studied many styles of Jujitsu. During the Russo-Japanese War, (1904-1905), Ueshiba served as a soldier in the Imperial Army. This gave him the opportunity to travel and come in contact with various arts of self-defense and combat.

After his release from the army, Ueshiba traveled to Hokkaido with the intention of engaging in training. It was here that paths crossed with Sokaku Takeda. An introduction was arranged and Ueshiba met Sensei Takeda. Ueshiba requested to be introduced to the secrets of Daito Ryu and was accepted as a disciple in 1912 at 29 years of age.

For the privilege of learning from Sensei Takeda, Ueshiba had to pay between $150 and $300 per technique. Ueshiba spent most of his inheritance during this period of training.

Though training in Daito Ryu lasted many years, actual training under Sensei Takeda was only 100 days. Ueshiba was very impressed by the secret techniques of Daito Ryu and later received a Transmission Scroll that listed 188 general techniques, 30 Aiki techniques, and 36 secret teachings.

In 1922 Ueshiba was authorized by Sensei Takeda to become an instructor of Daito Ryu methods, then taught as Aiki-Jujitsu.

After establishing approximately five Aiki dojos in different locations and under different names in the art of Aiki, Sensei Ueshiba formed the Budo Enhancement Association for Promotion of Martial arts. Sensei Ueshiba opened a dojo in Tokyo and dedicated himself to widening the basis of Aikijutsu. However, Sensei Ueshiba was much influenced by Shinto theology and later the Omote Religion under Onisaburo Deguchi whom he met in 1920.These two thoughts had much to do in changing the older, more severe forms of Aiki Jujitsu that Sensei Ueshiba had studied and taught to a more humane form. In 1938 Sensei Ueshiba emerged with his own distinct kind of Aikijutsu which was designed to be more suitable for use in social circumstances of that time.