I have read numerous accounts that misrepresent his view of Taiji as being unfavorable. It is true that “Bruce Lee,” or as he is known in circles that still emanate from his students, “Sifu Li, Jun-Fan” scoffed at overly-esoteric presentations of Taijiquan. It is clear, nevertheless, that he not only continued to practice the art well into adulthood, but that its mechanics and softness underlied his philosophy. Indeed, the fluidity and water-like softness of Taij became the foundation of all of Sifu Lee’s mixed martial arts, which he characterized as the philosophy of “Jeet Kune Do.”

Sifu Lee’s first instructor was his own father, Li, How-Chuen. The elder Li was famous as a Cantonese opera artist who had studied Taijiquan for many decades and had an impressive level of skill in the Nei Jia system of Kung Fu. 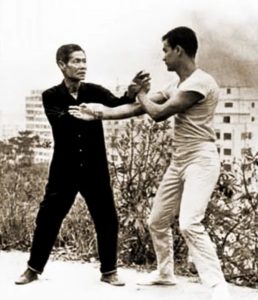 Contrary to popular belief among those few who are aware of Sifu Lee’s study of Taijiquan, he did not discontinue Taiji practice whatsoever, and has been filmed and photographed practicing the Taiji long form well into his 20s! Take a look and see for yourself!

As well, in Sifu Lee’s interview with Pierre Berton, he shows abbreviated movements of the Taijiquan form. He explains that it is a “slow exercise” to the interviewer who had never heard of it. But clearly, Bruce knew the postures by heart and expressed them while “talking with his hands” so to speak.

Sifu Lee studied from his father from a young age and without cessation for the next twenty years. He did, however, privately say to students and friends that in his teens the art began to “bore” him and that is when he moved into Wing Chun with his legendary Sifu Ip Man. Still, that merely was a shift in his focus. He would resume practice of Taiji as part of his regimen, as evidenced by photos and videos documenting this. It is ridiculous to imagine that he would demonstrate and be photographed and filmed doing the long form if he saw it as useless. 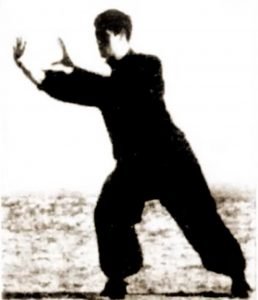 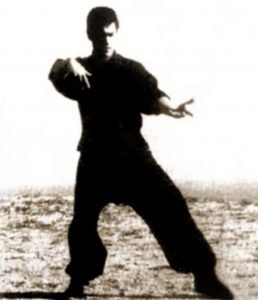 Still, even while Li emphasized the brotherhood of all martial arts, and the fact that there was something to learn from each of them, partisanship remains a strong influence even amongst those who idolize him. Many want to imagine that things like the “One Inch Punch” and the being “like water” were inventions of Bruce’s own insight, rather than standard teachings of the Nei Jia systems of Kung Fu such as Taijiquan.

The Taoist philosophical foundation of Taijiquan formed the basis for everything Bruce did martially, whether in cinema, competition, street fighting or developing the Jeet Kune Do approach and philosophy.

“Notice that the stiffest tree is most easily cracked,” he explained, “while the bamboo or willow survives by bending with the wind.”

At the time these photos were taken, Li would have been somewhere in his twenties. If you know Taiji, yo will immediately recognize the section above as the pushing movements leading into the “Single Whip” posture.

Taiji principles seem to underpin much of the philosophy within Lee’s Jeet Kune Do philosophy. Lee repeatedly exhorted and promoted the principles of Taiji through concepts such as “using stillness to overcome movement” and “the coexistence of hard and soft” as well as “the cultivation of internal as well as external.” It might surprise many people to realize that the Kun Jin “inch power” of Chen style Taiji is literally where Sifu Lee’s “one inch punch” came from.

Water flowing and crashing is the exact analogy taught in the Chen Village still to this day.

Bruce said “Reality is apparent when one ceases to compare.” These are wise words that martial partisans would do good to heed – particularly if they are amongst those who idolize Sifu Lee.

Looking to find out more about Tai Chi: Bruce Lee’s First Kung Fu Style? Give us a call at 937-254-7035 to schedule a time for you to come in and start trying classes out! Also, don’t forget to add TAMA Martial Arts and Kali America on Facebook. Check out Kali America’s OFFICIAL website and follow us on Instagram!